Connor graduated from Virginia Tech with a B.S. in Biology and Biochemistry in 2014, and joined the lab as a technician for two years.  Now a fifth-year PhD Candidate in the Cohen and Song Labs at UNC Chapel Hill, Connor studies astrocytes and inhibitory networks in Alzheimer’s Disease.  Connor is also interested in the interactions between the environment, genetics, and behavior in mood disorders and neurodegenerative diseases.  He manages the lab website and a science communication website,  Straight from a Scientist (SFS).  Outside of the lab, he enjoys hiking, swimming, graphic design, gaming, Brazilian Jiu Jitsu, paintball and caring for his various reptiles. Hanna is a fifth year PhD candidate and NSF-GRFP fellow. She received a B.S. in Biochemistry (and minor in Spanish Language) from Oakland University in Michigan, where she was an undergraduate research assistant in Dr. Sanela Martic’s biochemistry laboratory investigating the misfolding and aggregation of the tau protein. After, she joined the Biological and Biomedical Sciences Program, the department of Biochemistry and Biophysics, and the Cohen lab at the University of North Carolina at Chapel Hill. She has been investigating many facets of tau protein biochemistry. Like tau acetylation and phosphorylation in Alzheimer’s Disease, TDP-43 modifications similarly promote aberrant pathology seen in diseased brain and spinal cord of ALS and FTLD-TDP patients. Understanding such post-translational mechanisms could lead to better therapeutic avenues to pursue for ALS, FTD and other diseases characterized by TDP-43 pathology.

END_OF_DOCUMENT_TOKEN_TO_BE_REPLACED Acetylation-induced TDP-43 pathology is suppressed by an HSF1-dependent chaperone program in Nature Communications (Come back soon or contact us for a link!)

With many more to come!

Celebrating publications is a tradition in the scientific community.  In Todd Cohen’s words, “Research isn’t all that gratifying.  You work for years in the lab about something nobody knows about and finally submit a paper… months later it hopefully gets accepted.  You have to take the opportunity to celebrate”. (Or he said something similar).

There are no upcoming events at this time.

Welcome to the new website for Todd Cohen’s Lab at UNC Chapel Hill!  We will be incrementally moving our online presence to this web address. You can find our old googlesites website here.

This is the digital home for Todd Cohen’s lab in the Department of Neurology at UNC Chapel Hill, not to be confused with Jessica Cohen’s Lab from Psychology and Neuroscience!

Learn more about the research being done in the Todd Cohen Lab at UNC Chapel Hill here.

This website will provide us with a unique platform for discussion and public interaction.  The forum section of the website is under construction, but check back soon!  Any burning questions for Todd Cohen’s Lab at UNC can be asked here.

Stay tuned for more updates!  Any feedback is appreciated as well!  Leave a comment below and tell us what you think. 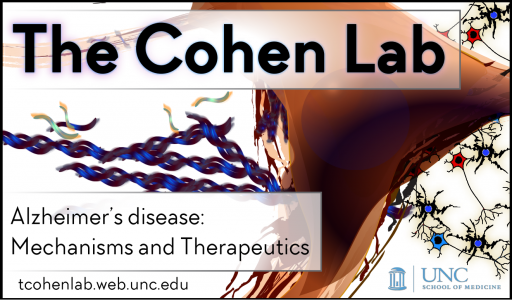